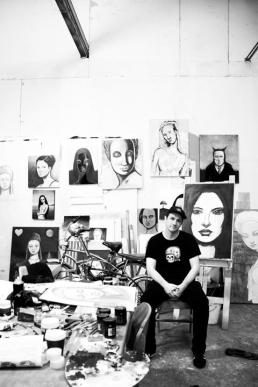 Malachi Aird started his professional career in the arts in the late 80’s completing an apprenticeship in Special Effects for film and television. He then went on to become a Madonnaro (Renaissance old Master Reproduction, Street Artist) and travelled Australia and Europe. It was during this period that he took on large numbers of private and commercial commissions, predominantly renaissance reproduction murals and portraiture. Malachi eventually worked for The Sydney Opera House as a set painter, and then moved to Europe to continue working as an artist, having his first public gallery exhibition at Galerie Pied de Biche in Rue St. Lazar, Paris.

During his two years in Europe Malachi was also fortunate enough to spend some time working with The Royal Academy while living in London, a seminal point in his personal development as an artist.

Now residing in Cairns, Malachi Aird has a studio at Crate 59 and continues to exhibit locally and nationally in group exhibitions throughout the year.

Malachi Aird is a traditional artist currently residing in Cains Queensland Australia. Starting his professional career in special effects for film and television in 1989, Malachi worked as a sculptor and illustrator for Adelaide based company Fright FX.

Beginning his personal career in 1992 Malachi started as a street artist chalking Old masters on the side walks in Sydney, Melbourne, London and Paris. It was during this time he was commissioned to paint four large set works for the Sydney Opera House.

Malachi began exhibiting his own figurative works in galleries in 1995 and has continued to exhibit annually. He has a studio based in the CRATE59 art-space and is currently actively involved in the local arts culture in the Cairns community.

Throughout his respectable career Malachi has maintained an avid interest in the art of portraiture and continues to produce commissioned works in this field.

His distinctive style and technique have seen Malachi invited to participate in several esteemed annual group exhibitions each year, most notably The Cairns Regional Gallery and Blunt Edge of Portraiture.